Skip to content
Store Locations Are Open! Free delivery on online purchase over $49

The coffee berries prove hard to spot amid the forest’s thick green shrubbery, especially those that haven’t ripened. But a coffee tree in full bloom leaves little doubt, its red berries glinting in a shaft of sunlight penetrating the canopy. I feel I’ve found what I came searching for. And there’s an added frisson to seeing these particular coffee trees — for they grow in the forests around Bonga, the very birthplace of Arabica coffee. 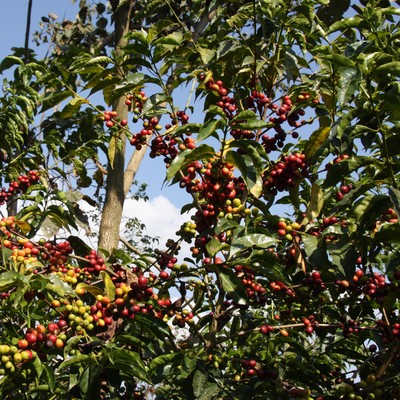 Despite its unique coffee heritage, Bonga, a town hidden away deep in southwestern Ethiopia, is not a name encountered often. I’d certainly never heard of it, despite extensive travels around Ethiopia, until I was invited by the Japanese embassy in Addis Ababa to visit a project helping smallholder coffee farmers.

The term “coffee” is said to derive from Kaffa, the ancient name for the present-day Oromia region in which Bonga lies. The Kaffa Kingdom lasted as an independent state for over 500 years, supported by a rich trade in gold, ivory and coffee, until annexed by Ethiopia in 1897. More notably, perhaps, legend has it that sometime around the 6th century in Bonga’s locality, a curious goatherder named Khaldi spotted his goats eating red berries from a shrub he’d never seen before, after which they became particularly frisky. So Khaldi gave the berries a try himself, the coffee bean was discovered, and breakfast time across the world would never be the same again.

Yet the global coffee phenomenon has largely bypassed Bonga, where coffee farmers have continued planting trees and picking berries by hand, mostly unaware of the lucrative coffee revolution occurring beyond their country’s borders. And while rural-to-urban migration is accelerating across Ethiopia, many Bonga locals have remained rooted to the forests, around which their lives have revolved for centuries.

The Bonga Forest Reserve, which covers some 500 square kilometers of hillsides, is among the last remaining subtropical moist forests of any significant size found in Ethiopia. Its varying topography, which ranges from 500 to 3,300 meters in elevation, partly explains the superb quality of its coffee berries, which grow best on land between 900 and 1,800 meters. The shade provided by forest trees also helps the coffee beans to develop more slowly, becoming more dense and flavorful as they go.

A group and I had arrived at the reserve after making the bottom-numbing 460-km journey from Addis Ababa by minibus. We’d been brought here to explore the work being done by the Japan International Cooperation Agency, a governmental group focused on development through technical cooperation. Since 2014, JICA has been working in Bonga to improve the standards of forest coffees harvested, as well as farmers’ incomes and livelihoods, and to protect 3,296 hectares of trees. It aims to achieve this primarily through connecting farmers with international markets, starting with Japan, where high-quality organic coffee has gained a huge following.

After my first night in Bonga, I awoke to find the slopes surrounding my simple hotel enveloped in low-lying clouds, a result of the air’s characteristically high moisture content. The effect was impressively cinematic, particularly as households came to life, their chimneys emitting small columns of smoke into the surrounding mists.

Later that day, I joined the group to trek up steep hills deep in those cloud forests. Sweat dripped onto the lenses of my glasses while diminutive Ethiopian girls with loads strapped to their backs passed me by. After a couple of kilometers stalking along winding tracks, we came to a clearing and I found myself gazing up at the towering Barta waterfall, plunging more than 100 meters down a sheer face of jagged glistening obsidian rock. And it’s not the only one — there are 14 waterfalls throughout the forest reserve, as well as hot springs, caves and natural bridges, formed through erosion by wind and water. Approaching the waterfall’s tumultuous base, I felt struck by how refreshing it was to find no entrance fee, no tourist signs — just a gift from nature for the senses. 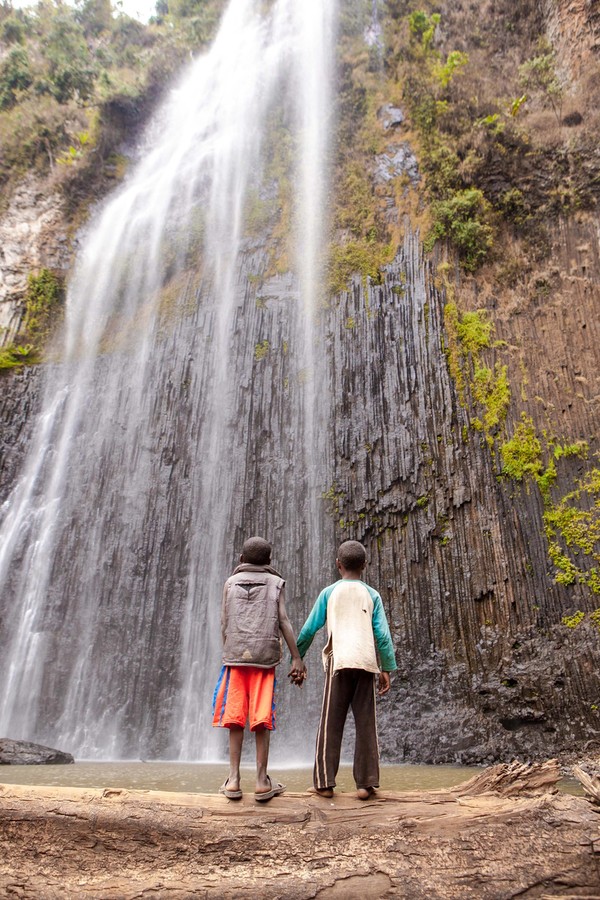 I fell behind the group as we continued, chatting with the local beekeeper who accompanied us, Mirutse Habtemariam. As we walked, he gave me a crash course on the foods of the forests. He pointed out forest cardamom (the most expensive spice in Ethiopia) and long green peppers growing among shrubbery beside dirt tracks, as well as fruiting banana trees with dangling purple flowers. Motioning skyward, he then directed my eyes to individual wooden cylinders hanging in the trees: traditional beehives, Mirutse explained.

In addition to coffee berries, fruits and spices, Bonga’s forests also abound with honeybees, who are attracted to the diversity of flora that grows here. Local farmers also often resort to prayer, it is said, beseeching the wild bees to stay in the hives and make honeycomb. The result, whether influenced by the surrounding vegetation or divine intervention, is delicious. Samples of the sticky nectar abound at a myriad of stalls dotted around the town, where tubs vary in color from dark caramel to light amber to opaque white. Not surprisingly, plenty of tej (Ethiopian honey wine) is also available; in fact, it is estimated that about 1,600 tons of honey is consumed inside Kaffa each year, mainly to make tej. Another important local industry is the Wush Wush tea plantation, the country’s largest. 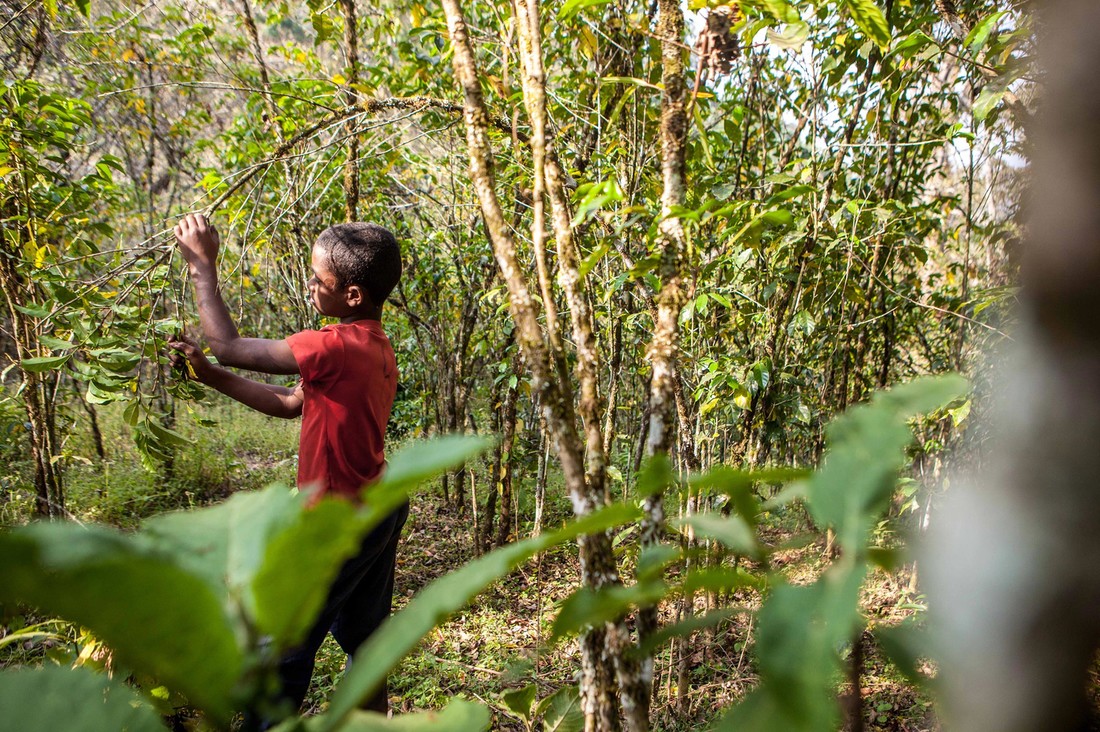 The closed-canopy forests also host large numbers of monkeys — the black-and-white colobus monkey being particular abundant, especially as it graces the label of the region’s Bedele beer. Lions, leopards, hippopotamuses, buffalos and antelopes likewise roam beneath the canopy, though they left our group well alone.

After all of our exploring, the group and I stopped for a much-needed rest at Mirutse’s house, where his sister presided over the traditional Ethiopian coffee ceremony — using forest-grown coffee, of course. First, she roasted raw green beans over hot coals before carrying the beans around the room to allow everyone to savor their scent. Next she ground the roasted beans with a wooden pestle and mortar before finally brewing them in a clay boiling pot, called a jebena. Growing amid such rich biodiversity produces high-quality organic coffees of scintillating varieties: coffee that tastes winey, with traces of jasmine and orange; coffee hinting of raisin, violet and mango; coffee with shades of strawberry, cherry and lychee.

Yet despite all of the natural treasures found in these forests, Bonga and the surrounding Kaffa Region have remained largely off the tourism map. Today the town’s population is only about 30,000, while Kaffa’s population hovers around 96,000. But Prime Minister Hailemariam Desalegn visited Bonga in early 2015 to inaugurate a new National Coffee Museum — part of efforts to better establish the area on Ethiopia’s tourist trail. With plans to act as a center for coffee research, the museum has also led to the construction of new hotels to supplement existing offerings. And so while the town may have missed out on the global coffee revolution in the past, it’s making strides to reclaim some of that lost ground — and prove that Bonga, the very birthplace of coffee, is a name well worth knowing.

The coffee berries prove hard to spot amid the forest’s thick green shrubbery, especially those that haven’t ripened. But a coffee tree in...

The coffee berries prove hard to spot amid the forest’s thick green shrubbery, especially those that haven’t ripened. But a coffee tree in...